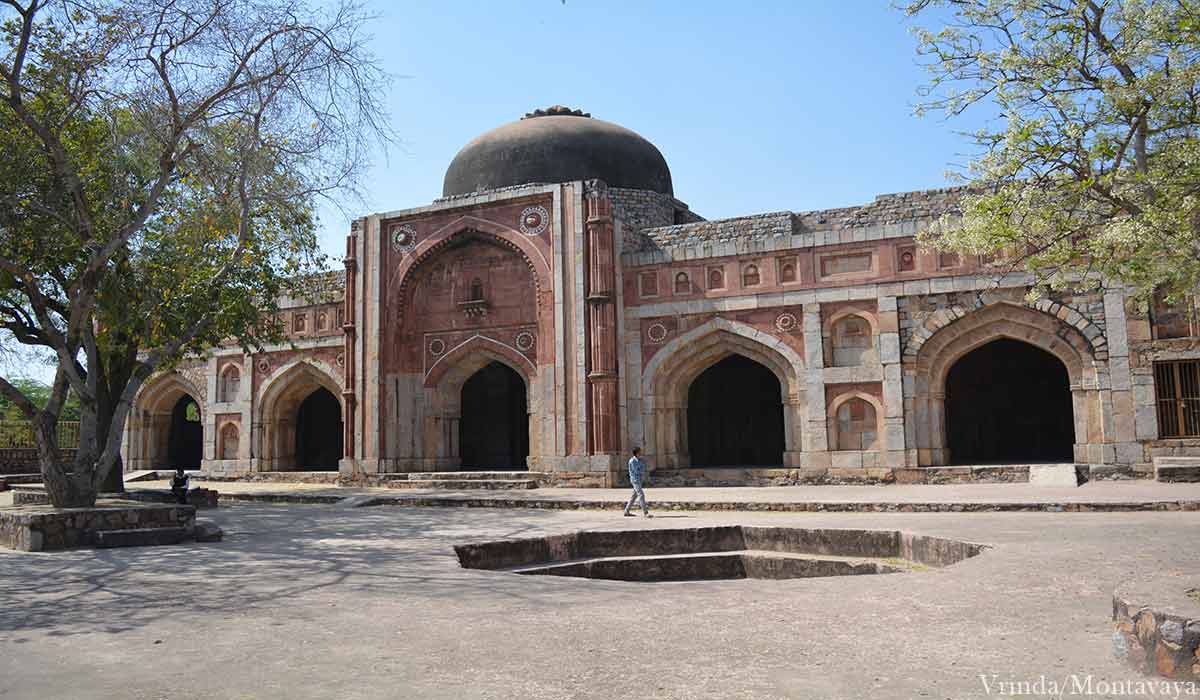 We are back with another hidden gem resting under the shadows of the world heritage site of the Qutub Minar complex. This is definitely a paradise for a history buff. This week, we are talking about Mehrauli Archaeological Park situated in Mehrauli.

Mehrauli is one of the seven ancient cities that form the present city of Delhi. Starting from the Tomar Rajputs to the British rulers, constructing monumental buildings in this region was always a trend. Mehrauli Archaeological Park is another low-key location that hasn’t caught much attention. Spread over nearly 200 acres of land, it has a boast-worthy timeline.

As you step out of the Qutub Minar metro station, you find a compound wall constantly accompanying you. It might seem like a regular forested area from outside,  but this is how subtly history coexists with modernity today. Though there are several entrances, none do any justice to what lies within the boundaries. The rusty gates greet you with exhaustion but as you enter, you get teleported to a different era. You feel like a time traveller, as you start walking along.

This area has an abundance of monuments out of which, the majority remain unlisted to date. Balban’s tomb, Jamali Kamali mosque and tomb, Quli khan’s tomb, and Rajon ki baoli are some of the prominent monuments here. 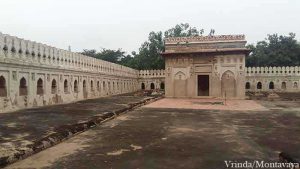 This magnificent structure is known for all the wrong reasons and is mostly visited because of the paranormal stories associated with it. Built in the 16th century, the structure comprises a mosque and a tomb. A famous Sufi saint named Jamali was buried in the tomb along with Kamali. Though there is no confirmation of Kamali’s identity, the complex came to be known as Jamali-Kamali mosque and tomb because these two were buried next to each other there. The mosque is built in red sandstone and has verses composed by the saint Jamali, inscribed on the walls. The tomb on the other hand has a flat roof and is adorned with colourful tiles. These are one of the best-protected monuments in the park. 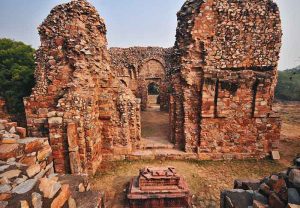 Balban’s tomb-Moving on to Balban’s tomb, it is one of the best structures hidden in the area. Here the ninth ruler of the slave dynasty, Ghiyas ud din Balban was buried. The trail leading to this isn’t visible due to thick vegetation but you can figure out a way near the Jamali-Kamali complex.  This rubble masonry ruin is noteworthy because it is the first structure in the subcontinent to have a true arch and a dome. Before the arrival of Islam in India, the architects here were not familiar with constructing arches and domes. They used corbelling (placing the stones in a stepped manner) to build domes and cut out arch shapes from a stone to make a fake arch. So this was a milestone in terms of building techniques. The structure stands without a dome now but the arches are still in a good shape. 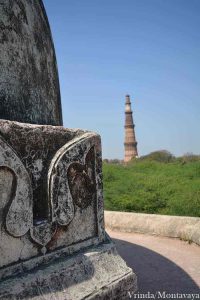 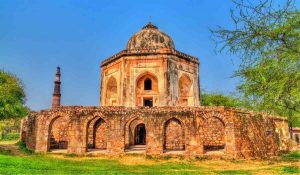 Quli Khan’s tomb- On walking further, in no particular order, we reach Quli Khan’s tomb. Also known as Dilkusha, this tomb dates back to the time of the Mughal Emperor Akbar but was turned into a pleasure retreat for Sir Thomas Metcalf in the 19th century. He was a civil servant and an agent of the Governor General of India at the time of the Mughal Emperor Bahadur Shah Zafar. This structure was enclosed by several gardens. The main building rests on a high plinth and has an accessible roof. The view of the Qutub Minar from the roof is mesmerizing. 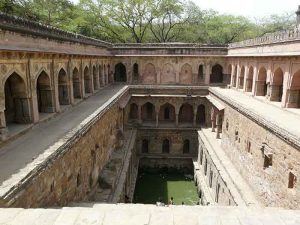 Rajon ki baoli-Saving the best for the last, Rajon ki baoli would come as a surprise to you. Built during the time of the Lodhi dynasty, this stepwell is the best-preserved attraction of this area. It is said to have been used for some time by Raj Mistri (masons). That is how the structure got its name. It is by far the best spot to click cool pictures for your Instagram.

Mehrauli Archaeological Park has something for everyone. The vast lawns are well-tended and ideal for picnics. The tracks that perimeter around them are used for walking and jogging. Being spread in such a large area, the walk gets a bit daunting but with enough resting spots and motivation, the entire complex can be explored in 3-4 hours on foot. There aren’t many food options available so it is advisable to carry your own snacks and water. You can follow a guide map just in case you feel lost. Several heritage walks are also organized if you want a guided experience.

Despite the intentions of the different rulers to build these monuments, today these structures portray an unintentional architectural harmony. Traces of Hindu temple architecture, Islamic architecture, and colonial architecture can be seen all in one place. How cool is that?

If you’ve stuck along this far, we hope we’ve managed to convince you to visit this place.

Stay tuned and keep exploring. We’ll be back next week.