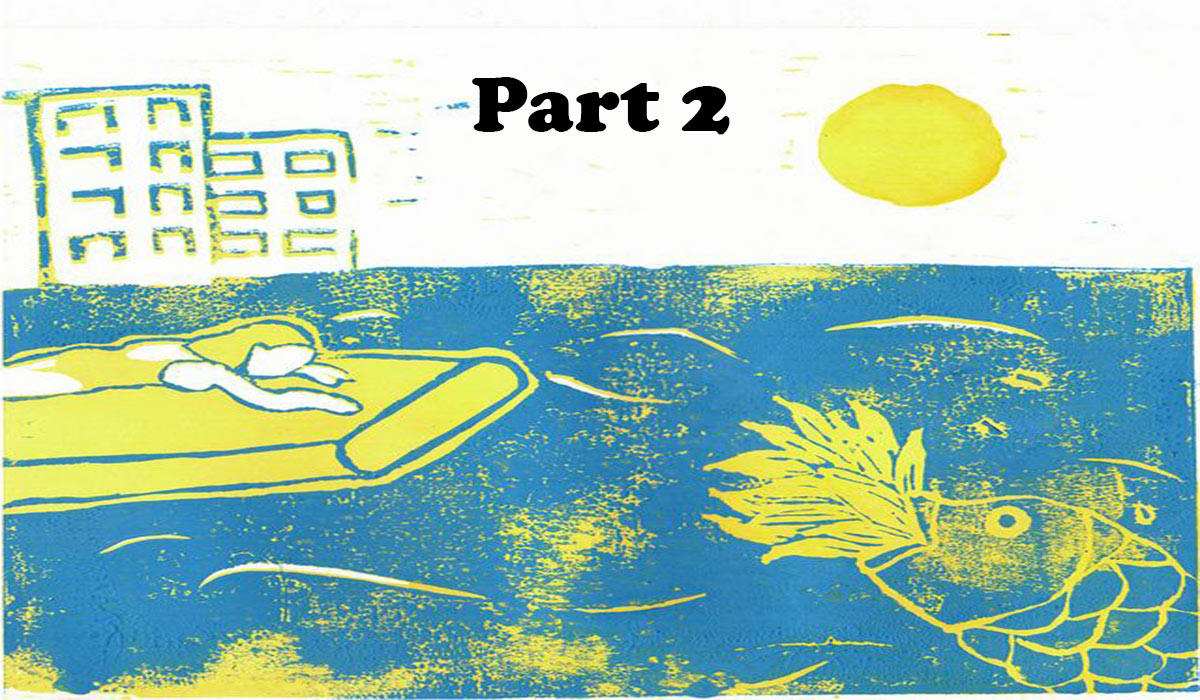 In part one we read about Muriel and her mother’s conversation in the hotel room. But what was her husband Seymour up to? Read further to find out.

A young girl Sybil Carpenter, her mother and her mother’s friend are enjoying a day at the beach. Mrs. Carpenter is putting sun tan oil on Sybil’s back while she keeps repeating “see more glass”. She is sitting uncomfortably in a fashionable yellow two-piece bathing suit which according to the author, she does not need for another nine to ten years. In other words it is not so appropriate for her age. Her mother leaves her at the beach to go for some drinks with her friend. Sybil explores the beach and finds Seymour and asks him if he is going in the water “see more glass” which sounds like she is trying to pronounce his name, Seymour Glass.

Seymour and Sybil converse about anything new that is happening. Sybil replies that her father is coming tomorrow. Seymour says that, “he has been expecting him hourly”. Sybil asks about “Seymour’s lady” referring to his wife. Seymour says that she could be anywhere, like getting her hair dyed or making dolls for poor children. Then he changes the subject by commenting on Sybil’s bathing suit saying that he loves a blue bathing suit. Sybil replies that her bathing suit is yellow and Seymour apologises.

They converse back and forth and Sybil says that another girl, Sharon Lipschutz says that Seymour let her sit on the piano seat next to him. Seymour defends himself by saying he was actually pretending that Sharon was Sybil. Seymour changes the subject again by suggesting to catch bananafish while walking towards the ocean. He also asks her where she lives and she replies that she does not know. He teases her and remarks that even Sharon Lipschutz knows where she lives. She yanks her hand from Seymour’s hand and picks up a beach shell. Feeling challenged, Sybil now confesses that she lives in Whirly Wood, Connecticut. She asks him if he has read Black Sambo. He says that he was just reading it last night and they start discussing the tigers in the story. They also discuss Sybil’s love for olives and wax. Sybil asks Seymour whether he likes Sharon Lipschutz, and Seymour tells her that he does. He likes that she is nice to small dogs and is always kind.

They wade around in the water and Seymour suggests looking for bananafish because it is a perfect day for bananafish. He explains to Sybil that bananafish are normal-looking fish that swim into banana holes and greedily eat all the bananas inside. As a result, the bananafish become so fat that they cannot leave their holes and then they die. Initially, Sybil is hesitant to believe the fishes’ existence but then she tells Seymour that she has seen a bananafish with six bananas in its mouth. Seymour then kisses the arch of Sybil’s foot. Sybil gets out of the water and runs back to the hotel.

Seymour gets out of water and collects his things from the beach a few moments later. In the elevator, he accuses a random woman for looking at his feet. Annoyed, she gets off the elevator. When Seymour finally lets himself in his room, he smells the new calfskin luggage and nail-lacquer remover used by his wife who is fast asleep on one of the twin beds. He takes out a gun from his bag, sits on the other bed and shoots himself.

Above story is the adaptation of the story A Perfect Day For BananaFish by J. D. Salinger.