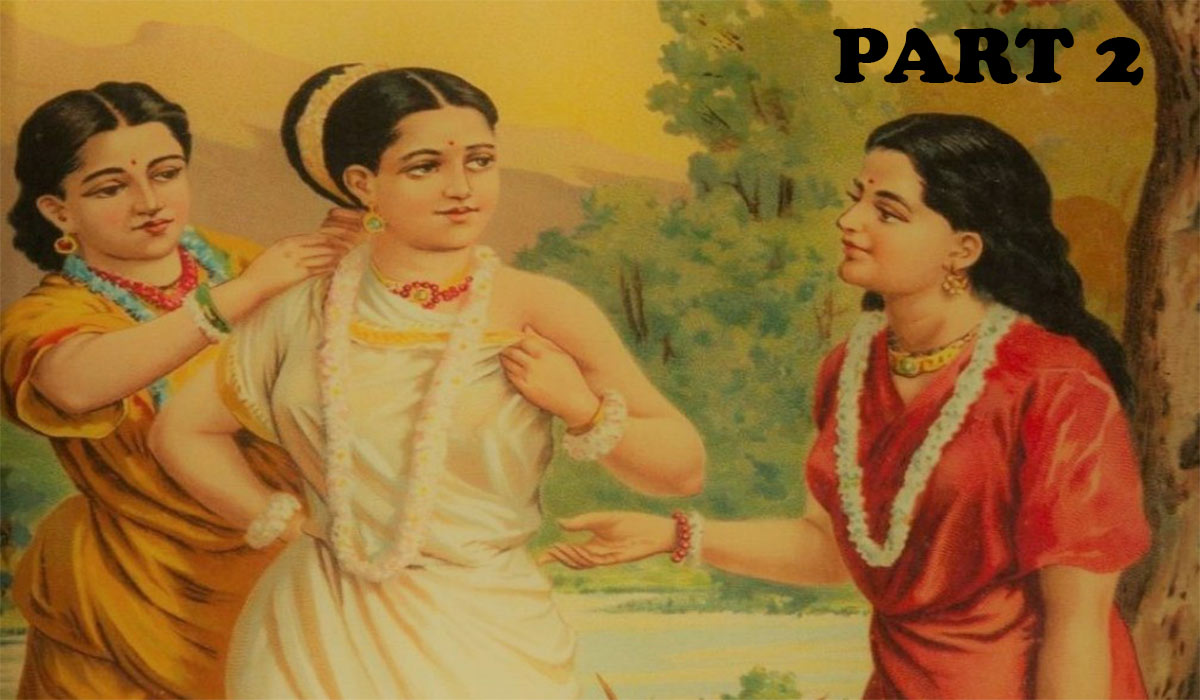 The path of love was not easy for our star crossed lovers. The evil tantric Kapalkundala and her Guru Aghoraghanta abducted Malti to offer her up to the goddess Chamunda. As the duo prepared for the sacrifice, they asked Malti to say her last prayers and think of the person whom she loved the most. Malti poured out her heart and professed her love for Madhav. Incidently,  Madhav who had been desultorily wandering near the temple after hearing the news of Malti’s betrothal, overheard Malti and interposed himself between Malti and Aghoraghanta. In the meanwhile, Kamandika along with an army of soldiers also reached the shrine in search of Malti. As she directed the soldiers to surround the temple, Aghoraghanta and Madhav combated fiercely leading to Aghoraghanta’s death.

Even though Madhav could rescue Malti but he still had to face another hurdle before he could marry her. As arranged by Malti’s father on the insistence of the king, Malti was to wed Nandana. On the day of her marriage Malti was set off to the temple along with Lavangika, Kamandika  and the brightly dressed entourage. Once alone with her confidante Malti could not contain herself and sobbing vehemently fell at Lavangika’s feet imploring to help her end her wretched life. Madhav who was hiding behind the goddess’ idol stood in the place of Lavangika. Malti mistaking Madhav for Lavangika embraced her and put the Bakul wreath round his neck. When she discovered what had happened she stepped back in embarrassment. Now it was Madhav’s turn to acknowledge his love for her. The lovers were thus united but the undesirable wedding was still looming large. Kamandika, Makrand and Lavangika assured the couple that this was the very valid Gandharv marriage (marriage by choice) and set them off to Kamamdika’s sanctuary.

Makrand, on the Kamandika’s instructions, dressed himself up in the bridal dress meant for Malti and eventually reached Nandan’s home where his beloved Madyantika was. Makrand there grabbed the chance to convince Madyantika to elope with him for Gandharv marriage. The couple left for the dwelling where Malti and Madhav were already residing.

Now it appeared that with both the loving couples united there should be nothing but bliss in their lives. However, destiny had some more surprises for them in reserve. Upon reaching Kamandika’s sanctuary Makrand had to fight the city police single handily. Madyantika reached inside and informed Malti and Madhav of the ongoing hustle outside.  It so happened under the circumstances that Malti was left alone. Suddenly Kapalkundla appeared and snathched her to fly off to Sriparvata where she intended to put her to cruel death to avenge her Guru’s death. Miserable Madhav was driven to almost insanity. Nothing could keep him interested and would visualise Malti everywhere. Makrand, his dear friend, felt helpless and as Madhav swooned in grief in his arms, he decided to end his own life.

At last fate began to smile upon the true lovers. Saudamini, an old pupil of Kamandika,who had mastered the magical powers through yoga practices saved the day for the two bereaved friends. She stopped Makrand from throwing himself in Patalvati and presented Madhav with the Bakul wreath. This wreath was from Malti whom she had rescued from Kapalkundala.  Now assured of Malti’s safety Makrand left to share the good news with others and Madhav was flown by Saudamini to bring Malti. Once everything was sorted with the reunion of the two set of lovers; Saudamini, the harbinger of good news, further delighted everyone with a letter from the King. In the letter, the King had given his approval of the two secret marriages and had praised Madhav and Makrand for their valour. Saudamini also revealed to Malti and Madhav that their union was the long cherished desire of their respective fathers.

Above story is an adaptation of the famous epic MaltiMadhav by Bhavbhuti, an eight century Sanskrit writer.