“The Earth is littered with the ruins of empires that believed they were eternal.”

The above quote stands true for this week’s monument. We are talking about Tughlaqabad Fort. Located in the city of Delhi, the fort is a riveting tale of a cursed and an abandoned fort that is now in ruins .

Built by the founder of the Tughlaq Dynasty, Ghiasuddin Tughlaq in 1321, it took nearly four years to be completed but was abandoned few years later and remained inhabited ever since. It served two purposes, the first was to protect the erstwhile ruler from the Mongol attacks, and the second, to serve as the capital of the ruler. The city of Tughlaqabad displayed a military officer’s understanding of the need for providing protection to his people. Even though it comprised palaces and bazaars, it was primarily a fortification to prevent any kind of invasion.

The fort stands on a rocky hill and is spread across a vast swathe of land. The main entrance is from the Mehrauli-Badarpur road. The entrance to the fort is a bit of a trek in itself. The high tapered walls that mark the boundary of the fort are in the best shape among the other features. Most of the structures are in a dilapidated condition but the view from the top is absolutely gripping. This is one of the two forts built by the Tughlaqs and is considered an architectural marvel.

The area is slightly treacherous as the paths are not well maintained but that adds to the thrill of the exploration. The trails are rocky and are adorned with unruly foliage so there is always an element of suspense. Wearing comfortable footwear is highly recommended.

According to a popular legend, the fort was associated with a curse of always remaining unoccupied or being inhabited by herdsmen. Like most of the historical monuments, this is also believed to house Djinns but there is no testimony to this legend. Such legends happen to be one of the reasons for the little footfall that the fort experiences. 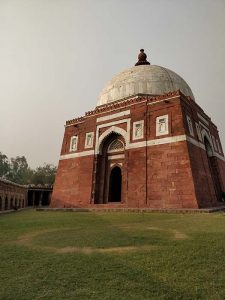 As you walk around the remains, you are bound to find a huge structure in red sandstone on the other side of the road. That happens to be the tomb of Ghiasuddin Tughlaq. It used to be a part of the complex back at the time but is now separated by a road. Its construction was completed by his successors. Once you are done with the fort, you must visit the tomb complex which is in a much better state. The tomb is a unique structure with tapered walls and a dome. Ghiasuddin’s cenotaph lies inside it. This area is comparatively better in terms of maintenance and is suitable for picnics. Together, both these areas provide an opportunity for adventure and relaxation.

The fort is a testament to the Tughlaq dynasty’s splendor and how Ghiasuddin won over Delhi during the period of unrest but the wreckage tells a totally different story today. It is a reminder of the volatility and the brevity of human life. On this note, we hope you find this fort worth visiting. Stick around to know about a new monument next week.