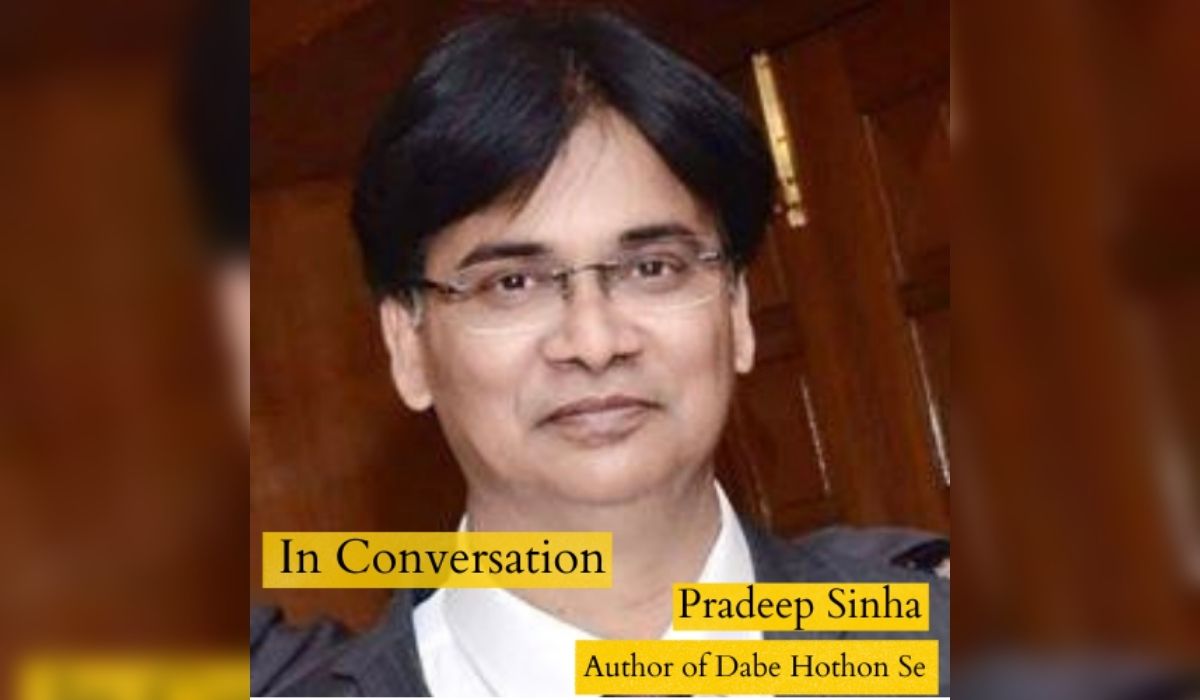 Poetry written in Hindi easily reaches your heart and tugs at emotions. Thus, when you come across a poet who can harness the power of this language, you shouldn’t miss the opportunity of reading their work. And Pradeep Sinha is one such poet. His debut book, Dabe Hothon Se is a collection of short poems in Hindi, written in his own style.

Born in Agra, in 1961, he completed his middle schooling from Agra and obtained his BE and M. Tech degree from IIT, Roorkee and IIT, Madras respectively. He started his professional career as a Building Energy Scientist at TERI, New Delhi. Currently, he is working as an advisor to the Sustainable Habitat Division, at TERI, New Delhi. When he’s not working in any of his professional roles, Sri Pradeep Ji spends his time writing poetry.

His belief is that an intelligent, emotional and emotive person may not be able to get success due to circumstances and sometimes, poor luck. They might not be able to get the success that they wholeheartedly deserve. Pain and excitement can sometimes break a person, but that person will get up and put themselves back together. And finds success in whatever he does. His book, Dabe Hothon Se, is a compilation of poems describing this process. His book is his attempt to share his beliefs with his readers.

We at Montavaya Consultants got the lucky chance to interview this poet. Here is what he had to say about his book, Dabe Hothon Se and on overcoming writing blocks.

Q1. I would like to start this interview off with an easy question, at what point in your life did you catch the bug of poetry?

I first got into the habit of writing during my adolescence.

Q2. How did the idea of getting your own poetry book published strike you?

After obtaining the opinions from my colleagues, especially those with an interest in Literature. First for my poetry and then second about whether it is worth going or publication.

Q3. Did you face any challenges in the publishing process? Maybe due to the pandemic causing delays or putting up obstacles?

My opinion is that it was my ignorance about the publishing procedures and lack of accessibility to publishing houses that slightly delayed my decision of going for publication.

Q4. Your book has some pretty deep and insightful poems. What or who was your inspiration when you wrote those poems?

I have divided my writing into a three-stage process. First, I see some events outside or inside that have an impact on me and compel me to think. Secondly, I take them in my perceptions and then finally express them in words.

As far as inspiration is concerned, it mainly depends on how effectively those events manage to touch my sentiments.

Q5. Do you have a favourite poem from the book? And what is the reason behind that favouritism?

Even though I like all my poems, my favourite poem is “Untardwand,” or Inner Conflict. The reason is pretty simple; it defines me well.

Q6. Is there any poem that you left out of the book due to some reason, but wanted to include in the book? And if so, what was the reason behind it being excluded?

Not exactly. In fact, I actually struggle to make it to forty. Earlier, I thought thirty would be enough.

Q7. Many poets and writers in their careers face what is termed as writer’s block. Have you ever faced that situation? What is your solution to overcome such situations?

In my opinion, responsibilities and mishaps are the two main features that can almost kill the creativity of a human being. But in my case, creativity took me out of such circumstances and helped rejuvenate me.

Q8. Writing poems seems like a labour of love. Some write to overcome grief, some write to motivate themselves. Yet, when it comes to marketing the work they have put so much effort in, writers usually don’t like it. What are your thoughts on this subject? Would you put as much effort into promoting your book as much as you put into writing it?

No doubt writers create since they enjoy it and most of the time, the commercial angle can be missing. Efforts put in writing the book and efforts made in promoting the book cannot be compared. There are experts and they know how to promote a work much better than writers can. However, writers also need to provide the required help to those experts to ensure it goes smoothly.

Q9. Is there a message that you would like to give to aspiring writers and poets?

Apart from all the qualities required to become good writers, they should be honest and have courage in bringing out the things as perceived by them without thinking about how others will react.